Cappadocia is one of the most important touristic cities in Turkey with its unique beauty and historical structures. Every tourist who comes to Cappadocia is fascinated by the history of this place with its fairy chimneys and its perfect nature. This city, which has a history of approximately 60 million years, is a cultural feast that has hosted many civilizations such as the Hittites, Persians, Romans, and Ottomans in the past. Cappadocia is famous for its natural beauty. İf you are a nature lover, there are many places to visit that blend history and nature, such as Derinkuyu Underground City or Göreme Open Air Museum. İn fact, these and similar places in Cappadocia can be said, the places you should see before you die. And also you definitely should see the Cappadocia Turkish Night show.

Cappadocia is not only a place with its historical and natural beauties, it is also a place where entertainment life is also developed. Cappadocia may be the right address for you if you want not only to travel but also if you want to rest your head or have an amazing night of fun. İncluding the Cappadocia Turkish Night.

What is Cappadocia Turkish Night?

This Turkish night is a show that includes various dances from Turkish culture, as well as various appetizers and foods from Turkish cuisine. This show, which is for entertainment purposes, is a show where our people can have a pleasant time and we can introduce our culture to foreign tourists. İn this colorful night, there are surprise shows, especially for the guests. On this amazing night, you can also join the dances and have a pleasant time.

What does Cappadocia Turkish Night İnclude?

The first thing that comes to mind when it comes to Turkish Nights held in the Cappadocia region is the demonstrations. These shows include folkloric dances from various regions of Turkey.

After the Whirling Dervish show ends, the live music starts. The most outstanding pieces of Turkish music are also song in the live lives. Meanwhile, the live music does not last long, it is music that tries to warm you up for the entertainment before the program. Because in the following minutes, a long entertaining show is waiting for you.

Our people are also very interested in belly dances too. The oriental shows, which our guests enjoy the most and which they can participate in, take place right after the live music. This dance, which is performed in the company of a few belly dancers, becomes even more entertaining with the participation of our guests.

The Turkish night entertainment program continues with folkloric dances. Folklore dances from various regions of Turkey are performed on this night. These folk dances belong to Ankara, Nevşehir, Aegean, and many of our regions. You will see the dances of different regions accompanied by cultural clothes. The Cappadocia Turkish Night creates an atmosphere where you will have so much fun.

Other activities add color to the night like the folklore dances. For example, one of them is the theatrical shows. These theatrical plays, which consist of various animated actors, are generally comedy-based. You can voluntarily accompany these plays, which will make your stomach hurt with laughter.

Another show that marked the program of the Cappadocia Turkish Night is the Caucasian dances. This dance, which is usually performed in Ardahan, Kars, and Iğdır regions, is a special show where female dancers wear long dresses and male dancers wear long cloaks. İt is a special show that impresses the audience. This entertaining final performance by professional dancers is a fascinating feast that adds a different flavor to the Cappadocia Turkish Night. At the end of all of these magnificent performances, play tunes and pop music are also played. At the end of the night with this music, you can dance as much as you want with your friends or family and end the Cappadocia Turkish Night of having fun. 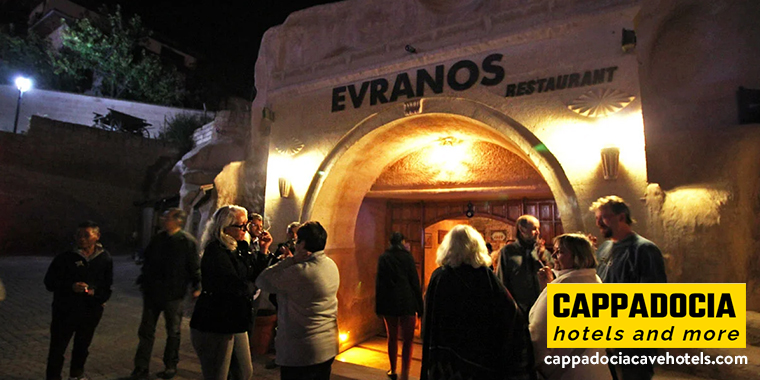 What Time Does Cappadocia Turkish Night Strat-How Much Will it Take?

The program usually starts between 20:00 and 20:30. Guests arrive at approximately 19:30 and settle into their tables. İf you want to join the Cappadocia Turkish Night, we recommend that you come early. You must make a reservation to participate in this entertainment. When you make a reservation, a special table is reserved for you, no matter how many people you are. The program takes about three to three and a half hours. Cappadocia Turkish Night hours start and end at different times in summer and winter. İn summer Turkish night starts at 20:30 and lasts until 24:00. İn winter it starts at 20:00 and lasts at 23:00.

With and Without Meal Menus

İn Cappadocia Turkish Night, you can have a feast of food rather than entertainment. This event is divided into two a menu with meals and without meals. A variety of drinks are available ın the no-meal menu. These can be alcoholic and non-alcoholic beverages. İt is also available in limited and unlimited beverage menus. But it changes from place to place. The no-meal menu includes some snacks. These snacks are nuts, Turkish delight, and fruit-style treats. One of the most important alcoholic beverages is the wines that Cappadocia is famous for. İf you are going to attend the Cappadocia Turkish Night and if you are a wine gourmet, it is not possible to join this entertainment without drinking wine. The other alcohols are also available. As we have just mentioned, you should get information about this subject at the place that you are going to go because the variety of such topics varies from place to place. On the other hand, you can enjoy this entertainment without alcohol with soft drinks such as water, fruit juices, tea, and coffee. Dinner menus include free wine service, various appetizers, at least two hat starters, and two main courses. İn addition to these,  salads and 2 types of desserts are included on the menu.

This restaurant has been serving customers since 1980. This place is one of the oldest places in Cappadocia. This venue, which has a capacity of 600 people, is the first establishment that started the Turkish night in Cappadocia.

One of the biggest advantages of this restaurant is that it has five lodges. İf you want to participate in this entertainment, the stage of this venue may be one of the most suitable stages. The size of the venue and the fact that there are no columns around allows you to see the stage more comfortably and have more fun.

İt is an ancient restaurant made of carved rocks, with a decoration representing the history of Cappadocia. Having a Turkish night in such an ancient place gives people a different pleasure.

İf you want to spend a perfect Turkish night accompanied by a Yemeni breeze, Harmandalı restaurant is the right address for you

The capacity of this restaurant is 450 people. This place, which consists of two halls, is one of the restaurants where the Cappadocia Turkish Night has been held for many years.

İf you want to join a Turkish Night in Cappadocia, the prices vary. The prices of the venues you will attend at night vary. At the same time, the prices of the menus with and without food are different. Generally, the prices start from 30 €. Without food, menus are around 30 € as they contain fewer treats in terms of content. Apart from that, the dinner menus cost around 40€ – 50€ because there are many foods, drinks, and appetizers. However, if you attend with a large group, a discount can be applied to you. You can get detailed information from your tour company about the price, discount and more detailed information.

Where is Cappadocia Turkish Night Held?

İf you are going to a Turkish night but you do not know how to get around, you can take a taxi. You can call a taxi from outside or from the hotel where you are staying. Taxi prices vary according to the place you will go from the place you stay. İf you have a private vehicle, you can also choose it. You can easily find the place you want to go with navigation. You will not have any difficulties in terms of parking. Because there are parking spaces in the places where the Turkish nights are held and these parking spaces are also free.

However, even if you are using navigation, you may experience difficulties if you are someone who comes to Cappadocia for the first time in terms of getting lost or finding the place. Because of this, if you are going to transport with your vehicle, it will be better for you to leave your Hotel earlier in order not to be late.

Cappadocia welcomes thousands of foreign and domestic tourists a year. Like domestic tourists, fore, and tourists are also curious about the culture of different countries they visit for vacation. They give importance to learning about the culture of the country for the first time. That’s why Turkish nights have a high participation rate for foreign tourists. They not only learn about the culture of the country, but they also experience the fun at the same time. As a result, every person in Cappadocia has an activity or a different tour. an interesting place. İt is rich with its history for those who are interested in history. There are also valleys where you can find peace for people who love nature. Apart from all of these, there are also many tours and activities that you can join, such as Turkish Night.  İf you visit Cappadocia, you will not be bored for a second in this region. If you want to have good moments and fun times during your holiday, what are you waiting for visiting Cappadocia?

Cappadocia Hotel Rooms With A Jacuzzi